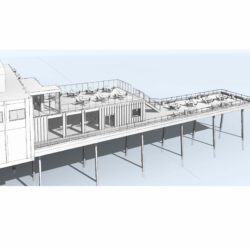 Plans have been approved to create a new extension and viewing platform on Wales’ oldest pleasure pier at Aberystwyth.

As part of an ongoing investment to regenerate the Grade II listed Royal Pier, planners have approved the creation of a new extension that will include a balcony area for viewing the town’s famous Starling murmurations and the Promenade.

Mid Wales-based architectural designers and planning consultants, Hughes Architects, submitted the plans on behalf of the pier’s owners Revegate Aberystwyth Ltd. It is part of a suite of projects that aim to bring a new lease of life to the Pier.

Last year an application was approved for a comprehensive facelift of the front of the building.

“The Royal Pier is not only Wales’ oldest pleasure pier, it is a well-known landmark and tourist attraction and a critical part of Aberystwyth’s built heritage,” said Doug Hughes, Principal Architect and Managing Director of Hughes Architects, which has offices in the town.

“We’ve been working closely with the pier’s owners over recent years to support their efforts to reinvigorate the pier, bringing it back to its Victorian splendour.

“The entrance design work is part of that, and this latest planning approval will allow the demolition and replacement of an existing store building on the structure.

“In its place a new building will be built, extending the internal area along the pier and providing a balcony area for visitors throughout the year.”

The pier’s owners were keen to provide a dedicated area for visitors to view the more than 50,000 Starlings that perform murmurations above and around the pier each year.

The spectacular display has been photographed and appeared on television globally.

The Royal Pier was opened in 1865. Designed and built by Eugenius Birch, who was also responsible for Brighton and Margate piers, the 800ft long structure was the first pleasure pier to be built in Wales.

It had to be rebuilt a year after it opened following storms and was again structurally damaged in the 1930s.

Hughes Architects building design team have undertaken in-depth research into the pier’s architectural history, ensuring all plans meet requirements set out for listed building consent and that of CADW.