Grasp the economic opportunities of the Newtown bypass 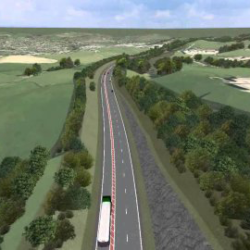 Hughes Architects director and principal architect Doug Hughes, who four years ago called for a strategic plan to be put in place to maximise the benefits of the Newtown bypass on the region, has urged the public and private sector to grasp and maximise the opportunities.

Doug Hughes, managing director of Newtown-based architectural design and planning consultancy Hughes Architects, published a report three years ago setting out proposals to maximise the economic and marketing opportunities ahead of the £90 million road opening.

“The county and town council, along with the Welsh Government has been working on individual proposals to ensure the promotion and economic opportunities of the bypass, but we should have been pushing it out to regions in the Midlands, the North West of England and South Wales about how this vital investment will improve economic and communication opportunities,” he said.

“I don’t believe we have maximised this so far as we have been looking too closely at the local traffic congestion issues rather than the much wider benefits the road will bring to Mid Wales and specifically the Severn Valley.

“A campaign should have initiated at least two years ago to market and promote the opportunities to other neighbouring areas of the UK in order to attract more business, investment and visitors to the area, many of whom have only seen or heard about the problems.”

Mr Hughes reiterated his call for a robust campaign to be undertaken. In a report published in October 2015 – The Severn Valley, The Innovative and Enterprising Heart of Mid Wales, it called for a “coherent and coordinated way of inspiring individual and collective energy, participation and direction to create an enterprising area with the potential for growth, new employment and social opportunities” on the back of the then planned bypass.

It added: “By working together we shall create the best environment in which to achieve our collective goal – the Severn Valley as a place to live, work and thrive.”

“If you were spending £90 million on a major commercial venture, you’d want to invest significantly in marketing that to potential customers to make it viable and profitable. The Newtown bypass is much the same, but there doesn’t appear to be a specific and combined campaign with the bypass,” he said.

“As businesses, we know the road will dramatically improve the quality of life for us as residents and workers in the town, as well as neighbouring communities. It will also improve transportation and communication for local businesses.

“But we need to tell the world about this in order to attract business, tourism and social benefits back to the area.”

The Newtown bypass was officially opened by Welsh Transport Minister on 14 February 2019.

Photo: A flyover of the Newtown bypass courtesy of Welsh Government