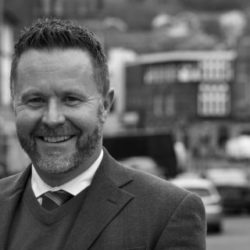 A growing Mid Wales-based architects and planning consultancy has revealed it is expanding into Cardiff as part of a growth strategy in South Wales.

Hughes Architects, which has offices in Newtown and Welshpool in Powys and Aberystwyth in Ceredigion, is to open a new practice in Cardiff with a dedicated team working on building design and planning consultancy for the city and region.

Managing director and principal architect, Doug Hughes, said the expansion is part of a long-term growth strategy and Cardiff was an obvious choice.

The practice already works with individuals, businesses and the public sector and housing associations throughout Wales and the borders, including Shropshire and Herefordshire. It specialises as a planning consultant, architects and building design consultancy.

Its work ranges from small domestic to large scale projects, from individual extensions and renovations, to larger housing developments, commercial and industrial premises. It also specialises in design and planning work on listed buildings, including Grade I and II structures.

“Cardiff is a natural progression for us. We will be appointing a lead architect for the new office in the coming weeks with the aim of opening the office by April, backed up by a team of specialists,” said Mr Hughes.

“We have an extensive background of working with individual householders through to private housing developers and housing associations. We envisage a similar mix of work in Cardiff and South Wales with continued growth in the housing and commercial sectors in the area.”

The practice has secured a location in Roath where its new team will be based, backed by its existing architectural and planning teams in Mid Wales.

Mr Hughes launched Hughes Architects in Newtown in 2001 after travelling and working around the world as an architect. Originally from Llandrindod Wells, he now lives in Newtown with his family, where the practice is based.

His early career was focussed on social housing design and development, based in London, before developing into private housing and commercial design work. His practice acts as building designers as well as planning consultants, working with clients throughout Powys, Ceredigion, Gwynedd, Shropshire, Herefordshire, Monmouthshire and the wider UK.

He is also an advocate of investing in communities and as well as being chair of the Severn Valley Effect, he has been involved in several community initiatives in Mid Wales, and is also a role model for the Welsh Government’s Big Ideas Wales young entrepreneurship campaign.