Plans have been submitted to return the gateway to Wales’ oldest leisure pier back to its Victorian roots. 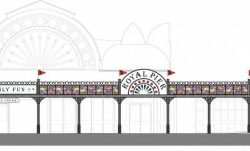 Plans have been submitted to return the gateway to Wales’ oldest leisure pier back to its Victorian roots.

The Royal Pier at Aberystwyth is set for rejuvenation 153 years after it was first opened in 1865 as part of an investment by owner Revgate Aberystwyth Ltd.

Building designers and planning consultants Hughes Architects have worked on proposals to enhance the entrance to the iconic Grade II listed structure.

“The pier is one of Wales’ iconic structures. It is also a key attraction and building in Aberystwyth, synonymous with the town’s Victorian built heritage,” said Doug Hughes, principal architect and managing director at Hughes Architects, which has a practice in the town as well as Cardiff, Newtown and Welshpool.

“The owner wants to ensure the future viability of the pier and part of this is to de-clutter the front entrance, returning it to how its original designer, Eugenius Birch, had intended it to be.

“There have been many alterations made to the pier over the past century, although the exterior hasn’t been updated since 1987 and these weren’t in keeping with the pier’s heritage or the surrounding environment.”

The need for updating the signage and facade is paramount for the business to remain sustainable, according to its owners. The existing signage and facade has deteriorated over time and reduces the attractiveness of the original seaside building.

Mr Hughes added: “Our designs take into consideration the pier as it was when it was opened in 1865, restoring the entrance sympathetically, returning it to its former glory.”

The 800ft long pier was designed and built by Eugenius Birch in 1865. He was also responsible for Brighton and Margate piers.

It was the first pleasure pier to be opened in Wales, although it had to be rebuilt a year after it opened following storms. It was again structurally damaged in the 1930s.

Siwan Geraint and Henry Beddoes of Hughes Architects design team have worked on the design, researching the pier’s architectural history, ensuring the plans meet requirements set out for listed building consent and that of CADW.

Plans for the new entrance have been submitted to Ceredigion Council’s planning committee for consideration. They form part of ongoing plans to invest in and enhance the pier.