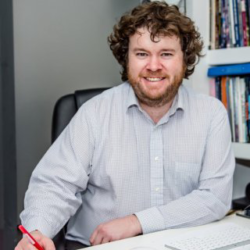 Richard Lewis has been appointed a director at one of Mid Wales and Shropshire’s leading architectural design and planning practices.

He joins Doug Hughes, Managing Director and Principal Architect, in the management of the business, alongside practice manager, Carol Aitchison.

The company has offices at Newtown and Welshpool in Powys and Aberystwyth in Ceredigion and clients throughout Wales and the UK, with a core focus on Mid Wales, Shropshire, Herefordshire and Cardiff.

“It’s great to be part of a team of architects and architectural technicians who pride themselves on the quality and high standards of their work. With a focus on continued growth we are in a position to offer the best services to our clients possible,” said Richard.

“Planning and building design controls and regulations, along with Local Development Plans and national guidelines in Wales the UK have changed and evolved in recent years. We’ve kept pace with that which has ensured our planning success rate is over 98 per cent and our design work is award-winning. We aim to build on that.”

Richard grew up in Newtown and attended Newtown High School before heading to university. He spent sometime in Chicago, studying under the influential American architect Stanley Tigerman at his Archeworks design school before working for Oosterhuis in Rotterdam.

Hughes Architects was established in 2001 by Doug Hughes and has undertaken a wide range of large and small projects throughout the region, including private homes, large-scale housing developments, social housing, industrial and commercial buildings and listed-building work.

This year it was a finalist in the Powys Business Awards.

“Richard has led on many of our key projects over the years and has an enviable reputation and track record in architectural design and planning success. He has been part of our growth to date and I’m looking forward to him helping take the business even further forward with the team,” said Doug.

The company will open a new office in Welshpool early next year having invested in a property in Berriew Street. It will relocate from its current office in Broad Street.

Its clients include private developers, landowners, housing associations and local authorities, as well as private homeowners and businesses. More details can be found at www.hughearchitects.co.uk.