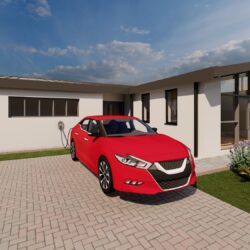 This means the architectural design of both residential and commercial premises will need to include such points into the fabric of the building where possible, according to Mid Wales and Shropshire architects and planning consultants, Hughes Architects.

The Electric Vehicle Charging Strategy for Wales, announced at the end of 2020, set out the Welsh Government vision for reducing carbon emissions by increasing the use of EVs. This is on the back of the UK government’s ban on the sale of new petrol and diesel cars in 2030.

“Demand is already increasing rapidly for EV cars and charging points. We’re seeing an acceleration of motorists needing to charge their cars at home and to also find fast charging points while on the move,” said Richard Lewis, a Director and Architect at Hughes Architects which has offices in Powys and Ceredigion.

At least 55,000 publicly accessible EV charging points will be needed in Wales by 2030, according to the government’s estimation.

Richard added: “In most cases, EV charging points are being retrofitted into existing car parks, on-street parking areas, and residential areas. As architects, we have already begun designing EV points into the fabric of both residential and commercial properties.

“EV charging points will become a standard part of building design. In the 1950s we saw the car garage become a standard feature of a typical home. We’re at a point where it is a necessity to incorporate it into our current portfolio where clients are looking ahead to their needs.

“The Electric Vehicle Charging Strategy for Wales has already stated that between 30,000 to 55,000 fast chargers will be needed in Wales by 2030. That’s a significant figure. It also states that EV charging points will become part of Building Regulations. It acknowledges that home charging will be key to its strategy.”

The government strategy document states: “We will introduce requirements for new homes to be ready for charging through changes to Building Regulations as well as promoting the wider support available for those wanting to install charging at home.”

They are also working on designs for commercial premises where company vehicles will be reliant on accessible charging points.

More details can be found at www.hughesarchitects.co.uk.