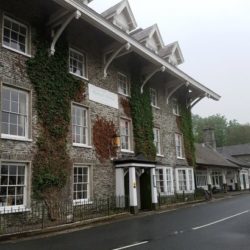 Work has begun designing a new future for a famous Welsh hotel that was built as a hunting lodge in the 1700s, refurbished by a duke and more recently starred in a BBC Wales police drama.

The Hafod Hotel at Devil’s Bridge has attracted thousands of visitors over the years who have stayed to enjoy the famous waterfalls just a few steps away from the hotel, as well as the surrounding countryside and Rheidol Steam Railway.

Originally built as a hunting lodge in 1787 before being converted into a Swiss style chateau by the Duke of Newcastle in 1839, the hotel was also centre-stage in one of the recent BBC drama Hinterland storylines.

Bought by Dewi and Nicol Gwynne, the couple are not new to such a challenge having already transformed The Cross Foxes near Dolgellau into a five star award-winning bar grill and rooms.

They have appointed Mid Wales-based design and architects practice Hughes Architects to oversee the transformation of the Grade II listed building.

“Hafod is a well-known location for many who have visited Devil’s Bridge over the years and its more recent starring role in Hinterland has added to its wonder,” said Gareth Flynn of Hughes Architects which has offices in Aberystwyth, Newtown and Welshpool.

“We’re currently working for the new owners surveying the property and creating designs for an ongoing refurbishment investment that will bring new life and business to what is an amazing property.

“The objective is to keep the hotel’s heritage – within the Grade II listed status is has – while bringing it up to modern standards expected by guests and visitors.”

Survey work has been undertaken and refurbishment is expected to begin shortly, undertaken as part of a phased approach.

Dewi and Nicol said they were looking forward to creating a new opportunity in the area.

“Devil’s Bridge attracts thousands of visitors each year and we want to support that by encouraging more people into the area to support the local economy and community. By refurbishing the hotel we will be able to offer more services and improved comfort for guests and visitors,” said Dewi.

“Working with a forward looking team at Hughes Architects, who have experience in working on Grade II listed buildings, we will be able to bring what is a famous hotel up to the standards expected in today’s tourism market.”