Have you read our latest article in EGO? 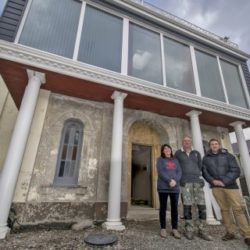 Our latest article has appeared in this month’s Aberystwyth EGO magazine. Have you read it? If not, here’s an extract.

No day is ever the same in a building design and planning consultancy. And that’s certainly the case for Aberystwyth’s Hughes Architects.

New homes, renovations and extensions play an important part, but sometimes you get that more unusual project. And one of those is a former chapel at Borth.

Libanus 1877 is the brainchild of Peter Fleming and Grug Morris who appointed Hughes Architects to work on a new boutique cinema, theatre and restaurant.

The transformation of will be completed in readiness for the building’s 140th anniversary early next year.

Libanus 1877 will be the first cinema of its kind to open in Wales for many years. “We’re well on the way to completing the conversion and opening Libanus 1877 by spring 2017, just in time for the 140th anniversary of the building of the chapel,” said Mr Fleming.

“We’re ensuring attention to detail throughout and once completed we believe it will be a significant destination for visitors and local people to Borth from a wide area.”

Indeed, Mr Fleming believes the mix of cinema and restaurant will attract people from the West Midlands and beyond to stay in the area.

Gareth Flynn, based at Hughes Architects Aberystwyth office, said it was exciting to see the project developing. “We’ve attempted to transform Peter and Grug’s passion and ideas into something that is both in keeping with the building’s heritage while creating a modern twist.

“We’ve designed a first floor glass enclosed veranda on the front, created a new auditorium and various rooms and areas for guests while ensuring the original features of the chapel are maintained throughout.”

The couple plan to open in the cinema in February with an official launch in March when the chapel building will celebrate its 140th anniversary.

New employment will be created in the town through the new venture, as well as attracting visitors and raising the profile of Borth as a destination, including the use of the Cambrian Railway which links the town to the Midlands through to Aberystwyth.

Libanus 1877 is just one of many building design projects Hughes Architects is working on in Ceredigion. Other work includes the expansion of an Aberystwyth’s business premises, new home designs, renovation of Grade I and Grade II properties, house extensions and more.

For more details about the planning consultancy and building design services provided by Hughes Architects, visit www.hughesarchitects.co.uk or telephone our offices at Cambrian Chambers in Terrace Road, Aberystwyth, or telephone 01970 636019.

Photo: (from left) Grug Morris and Peter Fleming of Libanus 1877 with Gareth Flynn of Hughes Architects