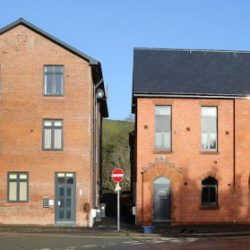 A social housing development designed by Hughes Architects has been nominated for an award.

The Glan-y-Dwr development in Back Lane, Newtown, Powys is made up of the former Magistrates Court and Territorial Army headquarters.

The housing scheme is now owned and operated by Mid Wales Housing Association, with its first tenants having moved into part of the development a few months ago.

It was the building design work of Hughes Architects that saw the vision for the property with the developers, Mid Wales Properties Ltd, which has been nominated by Powys County Council for the Best Social or Affordable Housing in the finals of the LABC South Wales Building Excellence Awards.

“We’re very proud of the design work undertaken on the buildings, bringing residential accommodation back into the town centre,” said Doug Hughes, Managing Director and Principal Architect at Hughes Architects, which is based in Newtown and with offices in Welshpool, Powys, Aberystwyth in Ceredigion and Cardiff in South Wales.

“The design was very important to maintain the buildings character and position within a conversation area, but to also integrate the housing and commercial elements of the town centre together again. It ensures the vitality of a community with people living and working within such an area.”

The development cost in the region of £1.4 million and was part-funded by £720,000 of Welsh Government Social Housing and Smaller Homes Grants with the remainder funded by Mid-Wales Housing Association. Loan funding has also been arranged with Powys County Council from its Town Centre Regeneration fund.

The properties have been built to a very high standard to meet the Welsh Government’s Development Quality Requirements, Life Time Homes and Secured by Design Standards.

They are located within a conservation area and every effort has been made to retain the overall character and appearance of the original buildings. This includes retaining original external features and window openings and using materials that are sympathetic to the original building.

Work will commence on the third and final phase of this scheme, a new-build development on vacant land between the former Magistrates’ Court and Regent Cinema, this month, according to Mid Wales Housing. This phase will provide a further twelve two-bedroom flats over four floors and will include a fully wheelchair accessible flat on the ground floor.

Hughes Architects provide residential, commercial and industrial building design, planning consultancy, interior design and other architectural and property services throughout Wales and the Marches, including Shropshire and Herefordshire.

The practice is a one-stop shop from initial building design ideas, through to planning applications and land development.