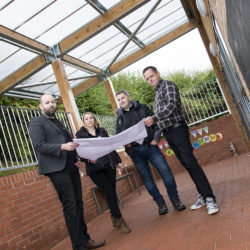 Penygloddfa Primary School turned to Mid Wales building design and planning consultants Hughes Architects to help expand one of its classrooms and it was former pupil and now Architectural Technologist, Adam Watkins, who was given the task.

It soon became a school reunion when builder Martin Phillips and structural designer Stuart Owen were appointed to the project, as they are also former pupils. Adding to the school’s link was Jessica Jones, a partner with G. Jones Construction, who was also a former pupil and now send her own children there.

“It was a bit of a coincidence but also great to be working on a project that we have a direct link to through our school days,” said Adam who heads up Hughes Architects Welshpool office.

“We were asked to extend an existing classroom to create additional space for the pupils as well as designing a new outdoor area that acts as a sun shade. Once the designs were completed, Martin undertook the building work and Stuart was consulting on the structural engineering elements.

“The project was completed in time for the new school term after the summer holidays and it’s great to see the pupils enjoying their new facilities.”

Headteacher Jim Macdonald, said the new extension was a great amenity and it was also good to welcome former pupils back.

“Although I wasn’t at the school when Adam, Martin and Stuart were here, it was good to see how some of our former pupils have gone on to successful careers and were able to return to work on such a project at Penygloddfa,” he said.

The design included the use of a structural steel frame that was then clad with sustainably sourced local timber that created an external area for pupils to play and work in.

Hughes Architects, based at Newtown, Welshpool and Aberystwyth, work as building designers on new builds, renovations and extensions to residential, commercial and industrial properties, as well as planning consultants, identifying and bringing forward land for large and small scale development, working with private landowners, developers, local authorities and housing associations.

Doug Hughes, founder and managing director at Hughes Architects, said: “When we were approached about the work at Penygloddfa we knew we had just the man for the job and it was good to see Adam getting involved in such a project.

“We’re always keen to be involved community orientated projects such as schools, and it’s great to see the new extension and outdoor area completed and in use by the pupils and staff.” 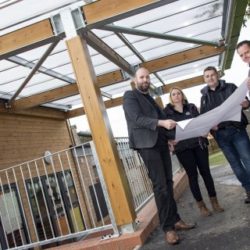